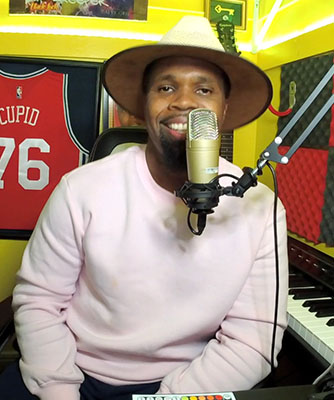 Lafayette, Louisiana-born R&B vocalist Bryson Bernard, popularly known as Cupid, began to sing in his church choir, encouraged by his pastor father. Despite his enrolling at the University of Louisiana at Lafayette with a full athletic scholarship in track and field, his real passion was music. He left the track team to form a singing group and eventually dropped out of college. The dissolution of the group didn’t interfere with Bernard‘s pursuit of a singing career — he went solo immediately afterward. He sang at every type of venue he could, including talent shows, weddings, and funerals. Bernard earned the name Cupid during this time for his impressive performance of the late-’90s 112 hit single “Cupid.” The singer first enjoyed radio airplay in 2001 with his single “Do Ya Thing,” which appeared on his self-pressed, eponymous debut the following year.

Cupid‘s gospel-tinged vocals began to attract local promoters and rappers alike. He was tapped to open for blues artists as well as to record background vocals for various rap albums. Both experiences informed his second independently released album, 2005’s The King of Down South R&B, which contained elements of country, blues, and New Orleans bounce music. In late 2006, Cupid was finally discovered by major-label Atlantic due to the buzz surrounding his local single at the time, “Cupid Shuffle.” He signed with the label the following January, and soon his dance record was standing its ground in the Top 30 of Billboard’s Hot R&B/Hip-Hop Songs chart for several weeks. It peaked at number 66 on the Hot 100. His major-label debut, Time for a Change, arrived later in the year and debuted at number 58.

Although “Cupid Shuffle” was eventually certified platinum by the RIAA, Cupid didn’t release a second major-label album. He continued to record, however, for Lafayette’s Hub City label, where he released the albums Feel Good Music, Positopia, and Dance Fever during the first half of the 2010s. An unsuccessful blind audition during the third season of the singing competition The Voice left him undaunted.