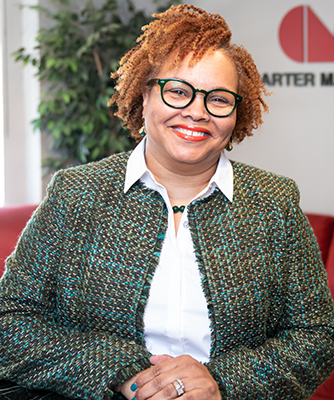 Deidre Malone is the President/CEO of The Carter Malone Group, LLC (CMG), a public relations, marketing, advertising and government relations firm headquartered in Memphis, Tennessee and an office in Jackson, Ms. Before opening the agency in May 2003, Malone served as Vice President of Marketing Development for ALSAC/St. Jude Children’s Research Hospital.  She also held the position of Director of Public Relations for St. Jude Children’s Research Hospital. Malone is a former broadcast journalist. She served as a news producer for WMC-TV Action News 5.

She is a 1999 graduate of Leadership Memphis and in 2001 served as Leadership Memphis Alumni Association President and a member of Beta Epsilon Omega Chapter of Alpha Kappa Alpha Sorority, Inc. She serves as Vice President of the Best Media Properties, Inc. Board of Directors, the ownership group for the New Tri-State Defender and is also a partner in M1TV Network.

A graduate of Jackson State University, she received a Bachelor of Science Degree in Mass Communications and a minor in Marketing. Deidre and her husband, Dr. Patrick Malone, have two sons, Patrick II and Brian. She is the proud grandmother of Patrick III “Trey” and Bailee Christian.