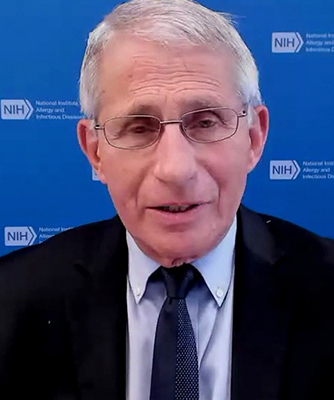 As a physician with the National Institutes of Health (NIH), Fauci has served the American public health sector in various capacities for more than 50 years, and has acted as an advisor to every U.S. president since Ronald Reagan. He became director of the NIAID in 1984 and has made contributions to HIV/AIDS research and other immunodeficiency diseases, both as a research scientist and as the head of the NIAID. From 1983 to 2002, Fauci was one of the world’s most frequently-cited scientists across all scientific journals. In 2008, President George W. Bush awarded Fauci the Presidential Medal of Freedom, the highest civilian award in the United States, for his work on the AIDS relief program PEPFAR.

During the COVID-19 pandemic, Fauci was one of the lead members of President Donald Trump’s White House Coronavirus Task Force. In the early stages of the pandemic, The New Yorker and The New York Times described Fauci as one of the most trusted medical figures in the United States. Currently Fauci is the Chief Medical Advisor to President Joe Biden, officially appointed in 2021.