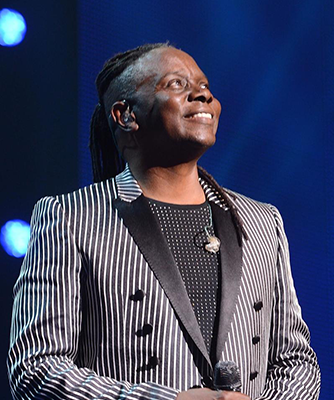 Philip Bailey began singing in church as a child in his native Denver. He remained in his hometown for college, studying at Metropolitan State University and the University of Colorado. During this period, Bailey played in a band called Friends & Love.

They opened for Earth, Wind & Fire, whose Maurice White consequently invited Bailey — and eventually the singer and percussionist’s bandmate, saxophonist Andrew Woolfolk — to be part of his group’s overhauled lineup.

Bailey joined in time to cut the third EW&F album, Last Days and Time (1972), and took on a greater role in the following Head to the Sky (1973), co-writing “Evil” and fronting “Keep Your Head to the Sky,” the band’s first two singles to peak within the Top 25 of the R&B chart.

From the mid-’70s through the early ’80s, Bailey co-wrote and was showcased on some of their signature songs, including the Top 40 pop hit “Devotion” and the number one pop and R&B single “Shining Star,” which went gold and won the band their first Grammy for Best R&B Performance.

Bailey co-wrote and fronted “Reasons,” a show stopper rivaled only by the Isley Brothers‘ “Footsteps in the Dark” as the era’s finest, well-known ballad not released as an A-side.

Bailey also founded Music is Unity, a leading non-profit that focuses on youth aging out of foster care.

Since 2007 MIU has provided grants to non-profit, community-based organizations and agencies offering supportive services to the over 23,000 youth who are emancipating from the U.S. Foster Care system each year.