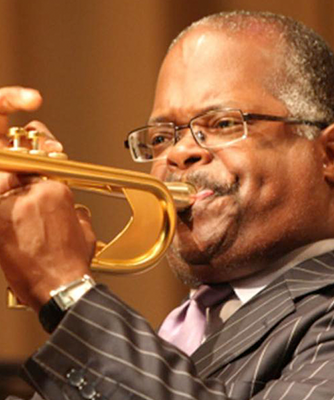 In the history of Jazz music, there is only one bandleader that has the distinction of having his orchestra still performing sold out concerts all over the world, with members personally chosen by him, for over 30 years after his passing.

Pianist and bandleader William James “Count” Basie was and still is an American institution that personifies the grandeur and excellence of Jazz.

The Count Basie Orchestra, today directed by Scotty Barnhart, has won every respected jazz poll in the world at least once, won 18 Grammy Awards, performed for Kings, Queens, and other world Royalty, appeared in several movies, television shows, at every major jazz festival and major concert hall in the world.

The Count Basie Orchestra is one of the most prominent jazz performing groups of the swing era, founded by Count Basie in 1935 and surviving long past the Big Band era itself and the death of Basie in 1984.

Under the direction of trumpeter Scotty Barnhart since 2013, the Orchestra continues to adapt the Basie sound to the modern era, while staying true to its signature sound.

Whether performing as a featured soloist and directing the Count Basie Orchestra in venues all over the world for three decades, playing muted solos behind legends Frank Sinatra, Cab Calloway, Joe Williams, Rosemary Clooney, or Tony Bennett, appearing with pianist Marcus Roberts at Carnegie Hall, giving lectures at universities in South Africa, Japan, Europe, and all over the United States, or leading his own quintet at major Jazz festivals and night clubs, musicians and critics alike have acknowledged Scotty Barnhart as an exciting and powerful voice in the world of Jazz.