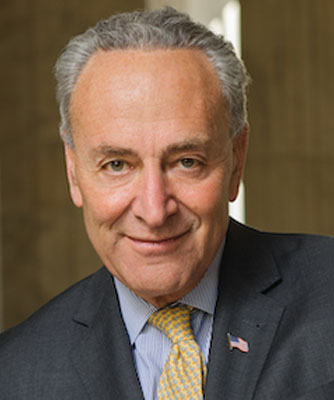 U.S. Senator Charles Ellis “Chuck” Schumer has dedicated his career to being a tireless fighter for New York. He visits all 62 counties every year and has delivered countless large and small victories across the state, including delivering $20 billion to rebuild after the 9-11 terror attacks and passing a $63 billion relief package to help New York recover from Superstorm Sandy. From massive snowstorms in Western New York to numerous floods across Upstate, Sen. Schumer has been there to deliver aid and support to New Yorkers in their time of need.

From authoring a permanent tax credit to offset the rising costs of college tuition, protecting Social Security and Medicare to encouraging job-creating infrastructure projects, Senator Schumer has made it a hallmark of his career to protect the middle class and those working to reach it – including finding common sense solutions to national issues.

Chuck was born and raised in Brooklyn, NY, where his dad owned a small exterminating business and his mom was a housewife. He attended public school and graduated from James Madison High School before heading to Harvard University, and then Harvard Law School. Chuck has two daughters, Jessica and Alison, and he still resides in Brooklyn with his wife, Iris Weinshall.

After graduating from Harvard Law School in 1974, Chuck was elected to the New York State Assembly, where he soon made his mark with his trademark vigor and relentless advocacy. In 1980, at 29, Chuck was elected as a congressman from the 9th Congressional District.

Chuck represented the 9th CD in Brooklyn and Queens for eighteen years, where he established his reputation as a consumer advocate and a pioneer in the fight against crime during the days of sky-high crime and murder rates that plagued communities throughout America. He was the leading sponsor of the Violence Against Women Act, which combats domestic violence and sexual assault, and the Brady Bill, which instituted mandatory background checks for handgun purchases. He championed the Hate Crimes Prevention Act, which organized data on crimes of bigotry and allowed federal authorities to prosecute these crimes. He also sponsored legislation that required banks and credit card companies to provide greater disclosure to consumers.

In 1998, Chuck was elected to the U.S. Senate; he became New York’s senior senator when Senator Daniel Patrick Moynihan retired in 2000. Chuck kicked off his first Senate term by announcing he would visit each of New York’s 62 counties every year, a tradition he continues today to keep in touch with voters from every corner of the state.

Throughout his time in the Senate, Chuck has made improving New York’s economy his top priority, bringing affordable air service, like JetBlue, to Upstate New York. He has worked to successfully retain New York jobs that were at risk of leaving and to attract many new firms to New York to create many thousands of family-supporting new jobs. Chuck was the author of legislation that eliminated barriers that delay low-cost generic medications from entering the marketplace and led the charge to make college tuition tax deductible. He also aggressively championed agricultural measures to preserve vital market support programs for New York’s dairy farmers and crop growers. In 2013, Chuck worked across the aisle to pass a comprehensive immigration reform package, the Border Security, Economic Opportunity, and Immigration Modernization Act, which passed the Senate with overwhelming bipartisan support.

After New Yorkers re-elected him in 2004, Chuck secured two powerful posts: a seat on the Senate Finance Committee, which oversees the nation’s tax, trade, social security and healthcare legislation, and the Chairmanship of the Democratic Senatorial Campaign Committee (DSCC). Chuck successfully led the DSCC for two consecutive cycles and greatly expanded the number of seats in his conference.